I was a never a fan of gnocchi because the thought of eggs and potato never appealed to me. I remember eating them at a restaurant in Delhi and hated it! But then later, many years later - I travelled to Berlin where I lived there for a month (to attend a language course) and there in supermarket, it was my first ever encounter with frozen raviolis and frozen gnocchi’s. I gave them a try again, because I knew how I would like them to be - simply tossed in some butter and parmesan instead of tossing potato and egg pasta in a sauce. And thats how I got obsessed with them. I ate them every three days and also bought them back to India (Yes, most of my shopping was grocery shopping!)

Anyway coming to this recipe - I never thought I would ever make gnocchi at home, but considering that there are no frozen packages available in Delhi, I had no other option, but to try them.

Reason number two why I am trying this, is because of a cook book that I have and its all about Potatoes! This recipe is inspired and adapted by the cookbook but not completely followed. Also, when you make this, please keep in mind, you will end up with a LOT of gnocchi’s. At least for five to six people.

So you start by making a dough of potatoes, one egg and lotttssss of flour. Just keep adding more and more flour (depending on how your potatoes were boiled) if they were too waxy, you will have to add more flour. Mine were unfortunately very waxy potatoes and I ended up adding a lot of flour to tighten the dough. While making the gnocchi’s I also spilled some aataa (whole wheat flour) on the slab while I was shaping them.The first step would be to grate the boiled potatoes and add one egg to the potatoes. Incorporate the mixture and add flour to it to make a dough. 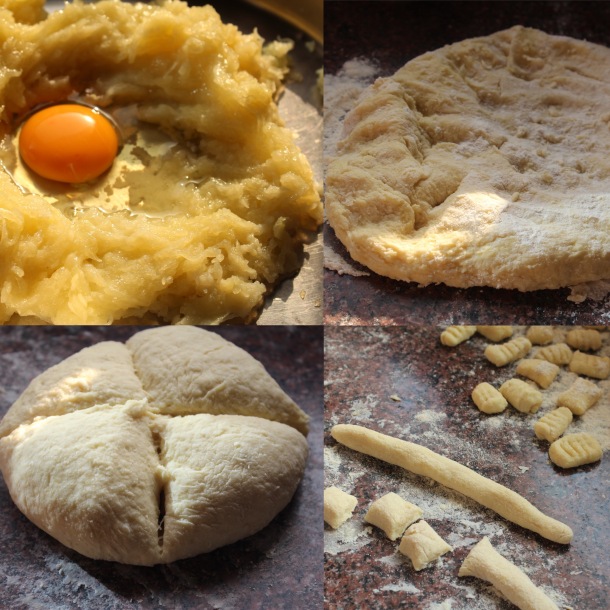 You need to make sure that all the moisture from the dough is gone. The dough will be very sticky, so keep adding flour to make a tough dough. Now divide the dough into four parts and take one part of it, divide it further in two parts and start making the long ribbons. Shaping the gnocchi is another task - time consuming, but obviously worth it! You simply make long rolls of the dough and cut them into tiny pieces which should be rolled on the back of the fork like this: 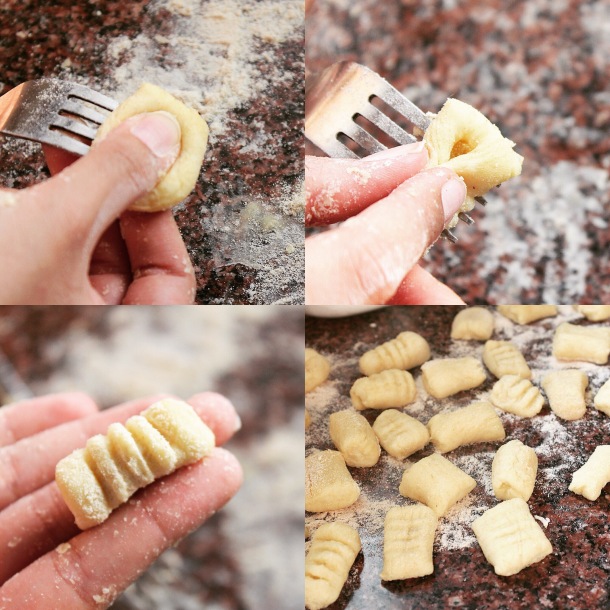 Here is the step by step recipe for the gnocchi:

Hi! Welcome to our site. We are Sheenam & Muskaan - two sisters living in New Delhi, India. We love cooking, eating and creating easy and delicious recipes to share with you guys. Read More…